For many first time expedition members on any multi-day trip, river or otherwise, the notion of carrying out all your human waste may be a new concept and a bit difficult to wrap your mind around. Imagine this; 26,000 people pooping 15 to 24 times and just leaving it where it lays every year in the beautiful Grand Canyon. Some of us are still around who remember when this was the norm back in the late 1960's and early 1970's. It was a mess! So you can understand why we carry our solid waste out of the Canyon.

The process is called many things, 'the unit', 'the duker', 'the shitter', and 'the groover'. The term 'groover' refers to the practice of using unimproved 20MM metal ammunition boxes to sit on while you did your business. The resulting grooves on your hinie sparked the name groover for the box. A modified toilet seat took care of that. Related to the grooving scene is placement, separation of function, hygiene, and courtesy. 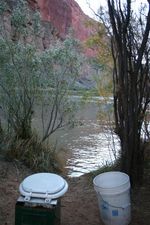 Groover placement is best left to experienced expedition members with apprentice groover people assisting and asking questions as to why the groover is located in any given spot. Proximity to the kitchen (downwind and not too close), the river, (for peeing purposes) and, to some the most important consideration, a beautiful and private spot from which the river reminds you of your place in the universe.

The systems are all variations on the same theme, which is pooping into a container, putting something on top of your deposit for odor management, and a process for securing full containers and preparing empty containers for use by the group. Containers should be metal or welded plastic. Here is a link to NPS regulations for non-commercial river trips (see page 18 for specific detail about on river toilet rules/guidelines). Use of rented or known officially sanctioned containers is suggested (some ad hoc arrangements based on plastic buckets have been disallowed by rangers). The term 'separation of function' means you don't pee in the groover. Some trips will bring along a well marked bailing bucket and set it next to the groover for peeing.

Hand washing after using the groover is 100% important in this wilderness setting after using the groover because the consequences can be catastrophic for the entire group. THIS HAS HAPPENED! Advanced groover operators can also tell who is having GI issues, hemorrhoids, and a whole host of other health related problems. The faint of heart need not aspire to this level of functionality.

Finally, all groover related items (properly cleaned every morning before the trip leaves camp for the day), go on the groover boat and hopefully are not mixed with any food products.

So...how do you know someone's "on-the-unit"? You'll need to decide as a group what the bathroom door key is. Some trips will use a paddle, some trips will use a throw cushion. The paddle sits at the start of the trail unless it's not there. If it's there, you 'should' be clear to grab the paddle and head down the trail to the unit. DON'T FORGET AND LEAVE THE DOOR KEY AT THE SHITTER!

So...what are you supposed to do if you need to take a dump during the day, when the main groover is packed away? You need a little porta-potty of course. It's called a Day Tripper, or Day Duker.

Updated in October of 2015, Grand Canyon National Park Non-Commercial Regulations mandate the use of two different types of Day Tripper, and the Lees Ferry rangers will ask about it in checkouts.

The First Day Tripper is used during the day when you are on the water. It is typically a 50mm ammo box. In the box are some sheets of newspaper or some lunch sized brown paper bags, large ziplocks, some waterless hand cleaner, and some toilet paper.

Use involves either ripping the lunch bag open down one side or spreading a doubled sheet of newspaper on the ground and squatting over it to do your business. Pee runs off if the slope is right. The pile is folded up neatly and put in a zip-lock bag, which in turn is put back in the ammo box. It's a real good idea to use some of the waterless hands cleanser to wash hands with.

Once at camp, take the ammo can to the shitter, and dump the paper bag/newspaper "bundle" into the shitter. The zip-lock bag then goes into a special container, usually a washable rocket box. Remember that newspaper retains its strength even when wet, so the blob may clog drains or hoses.

The Second Day Tripper is an ammo can of at least a half dozen disposable bags for solid waste, often called 'WAG-BAGS'. Don't dump a 'WAG-BAG' into your main shitter. While 'WAG-BAGS' are touted as being bio-degradable, they will indeed degrade more quickly in a landfill than ordinary PE bags but not in the groover for the amount of time we're interested in (1-4 wk). You will need to put your used 'WAG-BAG' in the same washable rocket box your zip-lock from the First Day Tripper goes in.

DON'T FORGET TO UNLOAD THESE DAY TRIPPERS IF YOU LOADED THEM. IT'S NOT GOOD RIVER PRACTICE TO LOAD UP A DAY TRIPPER AND NOT UNLOAD IT YOURSELF.

Contrary to popular urban legend, full cans do not explode in desert temperatures. The final destination for all your regular groover collected waste is usually an RV center or dumping station with designated facilities for this specific purpose. Your WAG-BAGS and soiled zip-locks go to a landfill that approves such dumping. 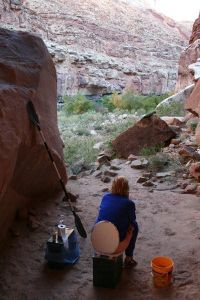 While the management of human waste is rarely sexy, when done well it is neither seen, heard ,or smelled. Done poorly, it can have a very negative impact on an otherwise magical trip. Pay attention to all the helpful information available on the subject. Good groover operators are worth their weight in.... er, gold.

One question you might have is how many empty toilets should you bring for your trip? This answer depends a number of things. Is your group in their late teens eating large meals or are you a group of 50 somethings? How many people are on your trip? Four? Eight? Sixteen?

One rule of thumb is that a standard rocket box, as shown here, will hold about 50 uses. That's three nights worth of service for a standard group of 16 people. Different toilet systems hold more of less solid waste. Aluminum risers that fit between a rocket box and the toilet seat will allow for a little extra filling of the toilet.

The next question is how many rolls of toilet paper should you bring? Don't bring the fluffy 2 or 3 ply stuff because it takes up too much room in the rocket box. Bring the 1-ply type. Figure two rolls for 16 people per day and you should have some left over. Divide the trip resupply up in at least two different boats. If something happens to one of the supplies, you still have another.

For information on how to empty those full poop cans at the end of your trip, click here to go to the Human Waste Disposal section in The Post Trip area.