Difference between revisions of "The Take-Out"

River runners can check to see who else is taking-out at Diamond Creek by viewing the on-line Recreational Launch Calendar and clicking on the appropriate launch month. 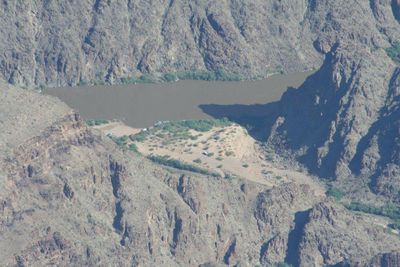 Once your river trip launches at Lee's Ferry at river mile 0, the next place you can take out that has vehicle access right to the Colorado River is Diamond Creek, at river mile 226. The 26 mile dirt road from Peach Springs AZ to the river is entirely on Hualapai Nation Land.

The Hualapai Diamond Creek road access fee is $60 per person (shuttle drivers and river runners) and $60 per vehicle. This fee applies whether arriving or departing from Diamond Creek. A Hualapai Tribal tax of 7% is now added to the $60 cost, for a total of $64.25 per person/driver. These fees are expected to continue to increase this year. For fee information contact the Hualapai Tribe River Running office at (928) 769-2219. 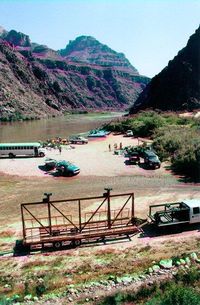 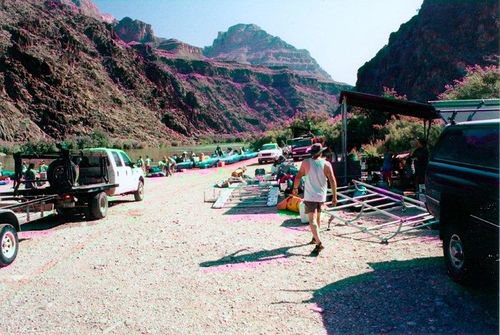 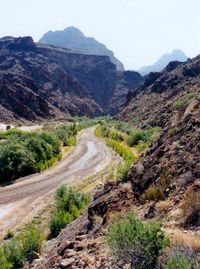 Diamond Creek Road The Diamond Creek road is prone to flash flooding in monsoon season (July-September). The road may be closed if it is in flood, as the road is a graded streambed that drains a lot of land to the east of Diamond Creek.

Commercial jet boat operations typically begin in early April and occur most days in the six summer months along the 40 miles from Pearce Ferry Ramp to Separation Canyon. This operation runs through the end of September, and picks up commercial passengers from several Grand Canyon concessionaire river trips and jets them out of the lower end of the Canyon. There is only one jetboat company that does this, called Canyon Jetboat Services LLC. This company is jointly owned and operated by the Grand Canyon river concessions that use it, including Western River Expeditions, Grand Canyon Expeditions, and Arizona River Runners.

The company operates two very large watercraft and when under way either to pick up or to deliver concessions passengers, they typically do not slow down for other craft. According to one of the United States Coast Guard-Licensed Masters piloting the jet boats, the jetboats draft an additional two feet while not on plane. Consequently, this pilot noted that not being on plane would actually create a hazard in the sandbar-riddled areas over which they travel.

The pilot also noted …while on plane our wake is minimal, maybe a foot, and while off it can be up to three foot. Most of the rafters coming down river aren't aware of these navigational problems and may think we are hot rodding by. Also to minimize wake, conditions permitting, we will maneuver the boat sharply away and then back towards the group, effectively sending the wake the other way. Without any way to inform them of what's going on sometimes they take it personal, which is a shame, as we are boaters too.

Even while staying on plane, other river runners the jet boats pass will experience a substantial wake as these large boats may pass by at speeds of up to 35 miles per hour. 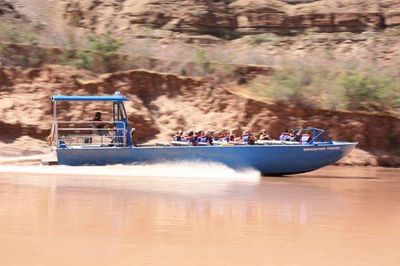 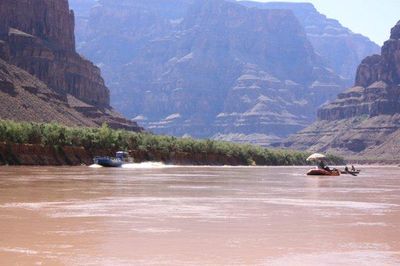 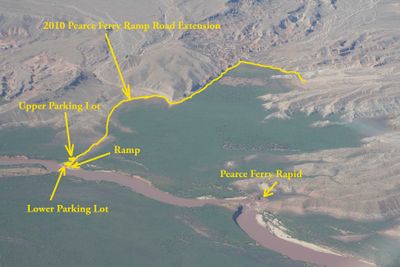 The Grand Canyon does not end at Diamond Creek. That happens about river mile 279. If you keep on going below Diamond Creek, the next place you can take out is at Pearce Ferry. Pearce Ferry is in Lake Mead National Recreation Area (LMNRA), and if the reservoir is full, the Pearce Ferry take out is on lake water. The last twelve years of drought has forced river parties to travel to South Cove at river mile 297 to take out. Beginning in 2008, LMNRA started constructing a new road to the river at Pearce Ferry. This was done as a new rapid, called Pearce Ferry Rapid, made concessions jet boat up-running unsafe. 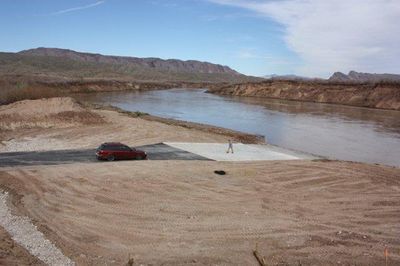 In March, 2010, the new Pearce Ferry ramp was completed. Here you will find signage, a bathroom and in the summertime the river concessions jet boats will be tied up at the downstream end of the ramp. The ramp may be covered with sand/mud, and a number of vehicles have gotten stuck loading here. Be careful. 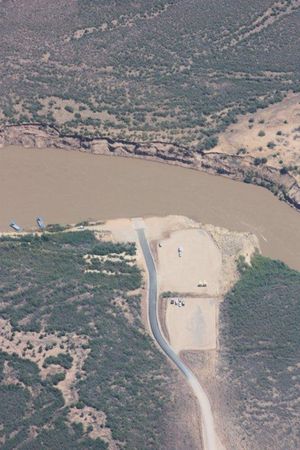 River runners are asked to be patient and understanding in the de-rig area as Hualapai, concessions and public rafters are all taking out in the same area. River runners are encouraged to maintain as small a take-out footprint as possible, and to de-rig as quickly as possible. Early morning take-outs are recommended in the high use seasons of late spring, summer and early fall, to beat the heat and crowds. Daytime temperatures in the heat of summer can reach 115 degrees. 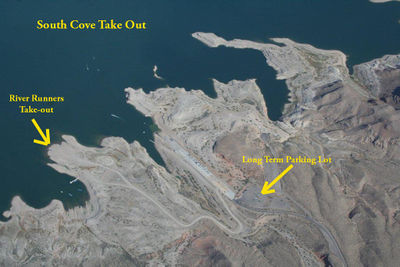 Some river runners taking out at Pearce or South Cove will tie their boats all together and float at night.

The NPS is still suggesting river runners avoid night floats due to the existence of rapids, the potential for collision risk with other watercraft and or submerged trees. All night float trips, as per US Coast Guard regulations, must have a person on watch with a lantern or flashlight ready to warn oncoming boats. Any boats with a motor running at night (only four stroke motors allowed), whether tied together as a single craft or running as separate craft, must have navigation lights displayed red/green on the front and a white 360 degree light at the stern (back of the boat visible 360 degrees).

River runner trash can be deposited at the Cerbat Landfill on the drive to Kingman on highway 93 from Pearce Ferry or South Cove. The landfill turnoff is at mile marker 60, and the landfill site is 2 miles north from 93 up the Mineral Park road. Landfill hours are M-F 7 to 3, Sat 8 to 3, closed Sunday. Landfill fees are $29.75/ton cash or local check only, with a minimum load fee of $5.85 for 300 pounds or less.

The new bypass bridge is open at Hoover Dam, and no Homeland Security inspection is required for use of the bypass bridge.

In Case of Emergency

For Pearce Ferry and South Cove take-outs, at Meadview, for Medical Emergencies contact Grapevine Mesa Fire District located in Meadview, which has an ambulance. They provide advanced life support (ALS) emergency ambulance service. They have a non-emergency phone number (928) 564-2777, and in Meadview respond to 911 calls.