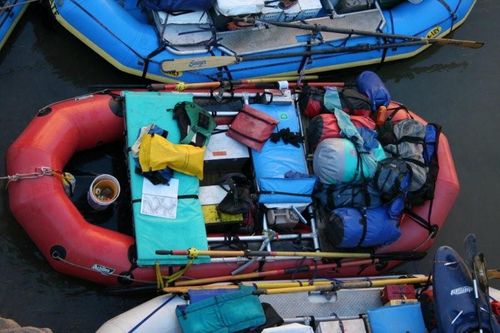 There is much off season discussion about the ideal boat cooler. Here's a write up on Boat Coolers by Sean Davis and Jay "Gonzo" Meierdierck:

The preparation and use of coolers is not a science. There are many opinions, there are many ways to do it. There are some who advocate that you shouldn't even take a cooler on a Grand Canyon trip. Alas, to drain or not to drain is one of the longest going arguments in river running.

1) In this case, cooler size matters.

Bigger coolers are more efficient (read: hold ice longer) regardless of brand - this is pure physics. This also assuming that you fill each cooler to the top with ice and cold items.

2) Cooler management makes a difference. This is REALLY important!

If you want cold stuff at day 17 on a summer desert trip you need to:

Have that cooler sealed for the first 2/3 of the trip and have it pre-frozen (see #7 below).

Keep you cooler covered, say with a Pacco Pad. The photo of the boat here shows a cooler covered with a blue Pacco Pad and a small white insulating cover under the pad.

3) The expensive coolers seal themselves. The cheaper costing coolers, like the Rubbermaid 150 quart Marine Cooler, seal up with duct tape or a user installed seal.

6) There's a very extensive Cooler Test at this page: [1]

7) The ice itself makes a difference.

As part of the trip-prep, find a source for the sculpture ice and make arrangements with somebody to store and freeze the cooler. This can sometimes be difficult. Try asking your local supermarket if they would do this for you.

The following is a case study in icing coolers, a system that Jay uses, that he learned from a good teacher, and that has worked for him. There are others that will argue every point, and that is the way of river runners. We keep on experimenting and innovating and that’s a Great Thing!

The following time-line is from Jay’s 2009 GC trip, with an April 8 launch date.

Launch day minus 10 About ten days before launch date, the cooler is taken to the ice house and the sculpture ice is purchased; cost about $20.00. The loading dock attendant at the ice house will chip or size the ice so that it just fits into the cooler. Last year this required two blocks with a very small void space between the two blocks. Following that the cooler is taken to the freezing location (i.e. Save-Mor, in this case).

The cooler is flooded with water to the top of the blocks. Roughly half the cooler is now full of ice with water in all the cracks between blocks. Jay used regular tap water, but notes some folks use more specialized water. The cooler then sits in the freezer for several days, so that the lower half of the cooler becomes one solid block of ice. Jay submitted a list of lunch meats and cheeses to be purchased at the deli department.

About this time, Jay also prepared the two dinner meals that he was taking for the trip. On his most recent trips, each person prepared one or two group dinners. The group breakfasts and lunches were purchased with group funds. Jay’s dinners are sometimes prepared, cooked and frozen at his home freezer; but he has also taken the separate ingredients and cooked on-site.

Launch day minus 5 Jay lives two days drive from Lees Ferry, so about 5 days before launch Jay picked up the cooler, loaded it with the two dinner meals that he had, plus the group lunches. The lunches were to have been packed in daily packages and placed in the cooler, but a miss communication caused them to not be frozen at time of cooler pick-up. The truck had been loaded the night before with space reserved for the cooler. The cooler is quite full and heavy, but a bag of ice cubes was added to fill any small voids. Some people will seal the cooler with duct tape but Jay did not do that.

Inner pad – Jay uses an inner foam pad that goes on top of the ice and frozen meals. This is made to fit tightly from an old foam backpacking sleeping pad. See Ethafoam food cover’’’ below.

Outer pad - Jay also has an outer pad made from quilted material with a silver reflective liner inside. This outer pad is kept wet (dipped in the river once on-river), as much as possible. Jay is not a fanatic about this, but at least every morning and other times when he remembers. This provides an evaporative cooling and adds significantly to the retention of ice.

Launch day minus 3 Upon arrival at Lees Ferry, Jay places the cooler in the freezer at the lodge. Jay has used Marble Canyon Lodge the last several years, and they have been very cooperative. Jay will often do some day hiking around the area, and stays at the lodge for three nights. This may be the reason they allow the freezing, but they are fairly nice people. Vermilion Cliffs lodge has also allowed the freezing of coolers for lodge occupants.

Rigging Day The day before launch the boats are rigged, but Jay’s cooler is left in the freezer.

Launch Day The cooler is picked up from the freezer and loaded in the boat.

Access to the cooler once on the boat: It is best to limit access to the cooler to as little as possible. Jay’s cooler is normally the lunch and left over's (breakfast milk, butter, lunch condiments as well as lunch meats, cheeses, etc.), so it is opened several times a day. But Jay tries to keep it to a minimum. Jay notes it is also a good policy to limit who has access to the cooler. On a hot summer day, opening the cooler and contemplating what should go in or come out is a bad idea.

Shade: When possible keep the cooler in the shade, but this is hard on the river, hence the "when possible."

Drain: Jay is a drainer, and is of the opinion that the water sloshing around in the cooler adds to the loss of ice.

Adding ice: As other coolers were emptied, there will typically be some ice left over. This could be placed in the remaining coolers, however, during Jay’s 2009 trip he only added ice from one other cooler, and that was an insignificant amount.

On the 2009 trip, there was a personnel exchange at Diamond Creek which allowed additional ice to be brought in. Since Jay’s cooler was one of two active coolers at this time, the new food (dinners, lunch meats, breakfast, etc.) and a block of regular ice were added to his cooler. 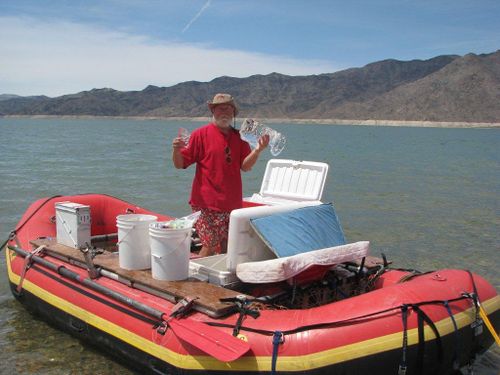 Day 29 After 25 days of rafting and 4 days of auto travel, Jay still had enough ice left (see photo) at South Cove to make a margarita or cool some sodas for the drive to Meadview.

Here are a couple of items you might want in your cooler as well:

Plastic bread crates can be cut to fit with a circular saw, and placed on top of your coolers ice. This protects vegetables and other foodstuffs from coming into contact with the ice.

Inexpensive backpacking foam pads cut to fit snug at the inside top of a cooler will help add a little extra insulation. Keep in mind this foam pad is light enough to blow away in the wind if you take it out of your cooler and set it on your boat deck.

Thanks and have a great trip, Jay and Sean

Click here to return to The Food Pack page.

This page is also linked from the Rivergear page, so click

here to go to the Rivergear page.