In the Grand Canyon, flash flooding is most common in the monsoon season of July, August, and September when the intense build up of storm clouds often occurs in the late afternoons with heavy rains. There rains may occur many miles away from the River. While flash floods during late afternoons in the monsoon season are common in the Colorado Plateau, the steep nature of the Grand Canyon can make them especially dangerous. Hiking in the cooler morning hours and finding a safe spot with shade to rest in the broiling afternoons during the monsoon season can reduce your chance of getting caught in a flash flood. Being aware of the possibility of flash floods, knowing what they are, and having a quick exit route during periods where there is a high probability of flash flooding may reduce the likelihood of getting swept up in one. Flash floods can not only impact hikers, but campers and even where you have tied up your boats.

Places like Havasu, National Canyon, and Diamond Creek have experienced major flash flooding. But realize that in the monsoon season, there really is no place safe. Every side canyon in Grand Canyon has experienced many flash floods.

River runners have been dealing with flash floods for decades. Here is a photo from August, 1951, taken looking upstream above Upset. There river runners, Dick and Izabel Griffith and John Schlump, waited out a summer monsoon at this overhang camp for a few days. 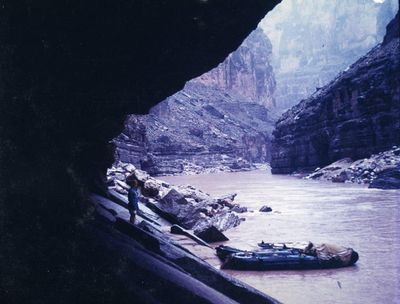 Eighty people from four river trips were scheduled to take off the river at Diamond Creek on Friday, August 31. At least one of the river trips, after waiting into the early afternoon to see if the road would be opened, decided to travel on downstream to the next take out, an additional seventy-one miles downstream. Hualapai maintenance workers hoped to have the road open Saturday, September 1, to four wheel drive vehicles. River runners are advised not to plan tight schedules for returning home after a river trip if the trip includes a Diamond Creek take-out during the monsoon season.

In August, 2008', a do-it-yourself river trip was separated from thier boats at Havasu Canyon. The group camped Friday night, August 15, 2008, at Upset Hotel, having spent Friday afternoon hiking in Matkat and then running 150 Mile. The group wanted to be in Havasu early, and to stay the whole day there. The group got into the harbor at 9:00AM, and pulled their boats all the way into the harbor to tie up, wanting to keep out of the way of the other trips that would pull in later in the day. The Havasu water was its typical blue, and the weather was hot and sunny.

The group used an inflatable to get the group up the narrows and exited creek right, leaving the inflatable about 6 feet up above the river. Some clouds came in, but that was the forecast, as the trip participants had been watching the weather forecasts before the trip and the group understood it was monsoon season. Around 1:00PM Saturday afternoon August 16, it started raining and hailing. By this time, one party member was on a ledge in what is known as the "Motor Pool", one group member was across from the mouth of the small unnamed drainage that comes in from Havasu Creek right and is just below Beaver falls, and the rest of the group was above Beaver Falls, over three miles from the River. The small side tributary flashed, with boulders coming down the side drainage with the water. The group above Beaver hiked back from Beaver to across from this small side drainage, rejoined the person there, and headed on downriver.

This was 2 or 3 in the afternoon. They worked their way down Havasu Creek left. The water dropped back down, and the group rejoined the one party member at the Motor Pool, then continued on to the mouth of the canyon, arriving about 5:00PM. On arrival the group found their inflatable and all rafts no longer in the mouth, having been flushed out of Havasu and now somewhere downstream on the Colorado River. A commercial river trip notified the NPS late that afternoon that they had seen the empty boats. The group spent the full moon night on a ledge on Havasu Creek right. Though short of food and drinking water, the groups spirits were high.

The sky was clear that night, and another and much larger flash flood, peaking at over 1,500 cubic feet per second, sounding like a freight train, came through a little after midnight. The group moved up-slope, thinking their location was unsafe. It turned out later they could have stayed where they were, but they didn't know that at the time. The group could hear boulders clunking down the creek bottom. The first National Park Service helicopter came by at 7:30 AM Sunday morning and started a rescue of the river party. 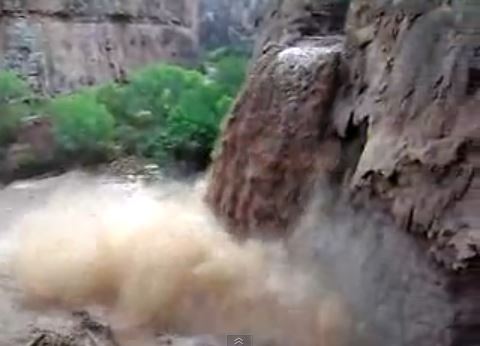 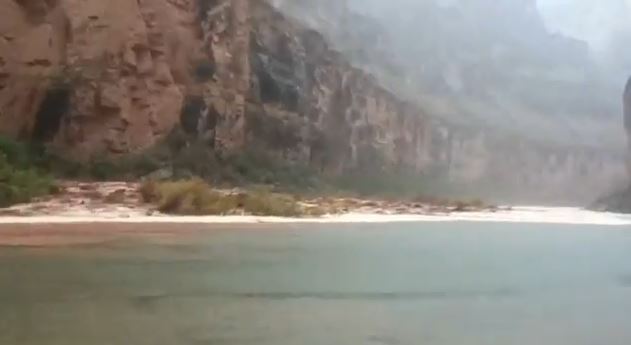 There is a saying that flash floods cannot occur in a wash that has running water. Understanding the dynamics of a flash flood can explain this saying.

The friction between water and water is much lower than between water and soil, rocks and plants. When it rains and runoff begins, in a dry wash the water is running over soil while in a wet wash with running water the runoff is faster because there is less friction to hold it back. Since the runoff is faster in a wet wash then shouldn't this be our concern? As the rain continues and more runoff occurs in a dry wash it is flowing over the initial runoff. The initial runoff travels slower than the later runoff which catches up with the initial runoff. This runoff passes over the top of the initial runoff and contacts the soil, slowing down. The water above is traveling faster than the water contacting the ground and a tumbling motion ensues that pulls the soil and rocks and everything into the vortex. The front of the flood travels slower than the runoff behind resulting in a wall of water building up and coming down the wash. The danger of a flash flood is due to both this wall of water that provides little warning and the amount of sediment and debris that is drawn into it by the turbulent action at the front of the flood.

There is an exception to the rule that flash floods cannot occur in a wash that has running water. If the amount of water running in the wash is small compared to the width of the runoff then the friction the runoff encounters is mostly water on soil with just a little water on water and so a flash flood can still occur. Sometimes there will be a small flow in the wash that warns of a flash flood coming and it is essentially of this nature where the flow behind is much wider than the small flow.