This chapter includes info helpful to those new to the Grand, or any river, including keeping a group functioning, and how to handle conflicts. 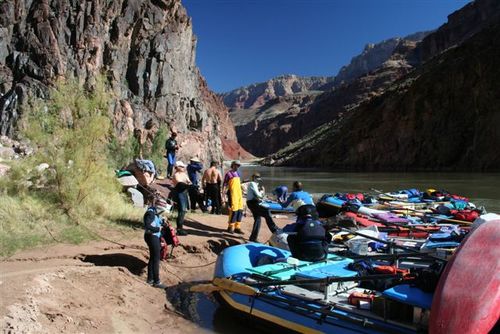 If your group has members leaving or joining at Phantom Ranch or else where during the trip the group dynamics can be an important consideration. Those members leaving can change the dynamics since the cliches that form amongst the trip members probably will be altered. These can be changes in work assignment groups or those on rafts or casual groups. For those joining the trip it can be particularly trick since cliches may have already formed and it may be hard for those joining to break into a cliche that has formed after a week or so on the river, especially if they do not already know several people on the trip. They may feel excluded from things that are going on. So it is important to get them integrated into the group and make them feel a part of the expedition. Ice breakers or assigning them tasks with other people rather than solo tasks can be helpful.

Take a group of people with various personalities and idiosyncrasies and place them in a group of friends and total strangers in an environment where they cannot get away from the group (unless they want to start talking to rocks) and what do you think happens? Add in an enclosed feeling from a deep canyon, huge rapids that can be heard from a distance and physical stress. You get the picture that Group Dynamics can get stressful at times.

In extreme cases, a participant on a trip may need to be removed in a strait jacket. This has happened before. But more common is what is called the "tenth day syndrome." If there is some annoyance or difficulties between members of a group, it is likely to erupt about the tenth day of the trip (your mileage may vary). It may even be people that have done many trips on shorter rivers together but on such a long trip as the Grand Canyon little things can erupt and cause dissension within the group.

A good leader is aware of the tenth day syndrome and if he/she senses little problems between members it may erupt and possibly it should be addressed in some way.

If the tenth day syndrome strikes your group (and it does not happen to every group) then knowing that many groups encounter dissension at about this time may help you keep it all in perspective.

You also might want to read A Primer for New Boaters for additional information on Group dynamics.