Life (and Death) of the Party 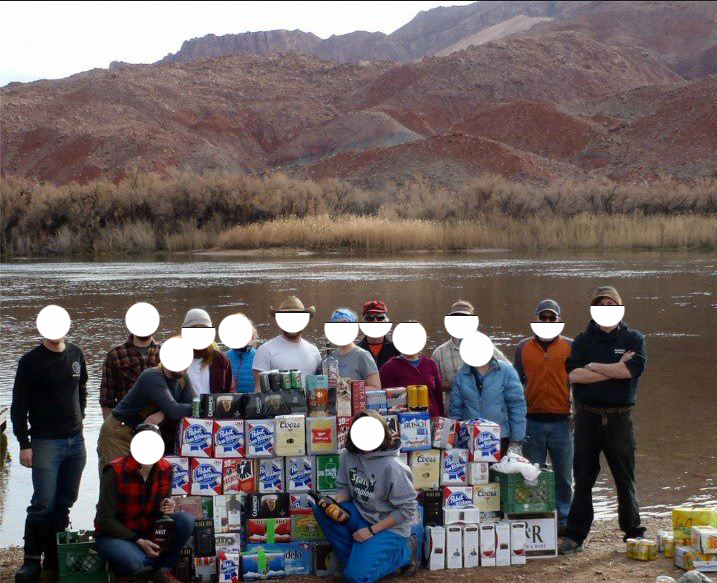 This photo is of a group of river runners at the Lee's Ferry put-in getting ready to raft through Grand Canyon. They made it safely through the canyon. Others did not do so well.

The 10th anniversary edition of the book Over the Edge: Death in Grand Canyon by Michael Ghiglieri and Thomas Myers, recounts a concessions passenger on a Diamond River Adventures motor trip drinking heavily and drowning in 1981 (pg 296). Then there is the drowning of another "heavily intoxicated" concessions passenger, also on a Diamond River Adventure trip in 1997. (pg 315)

Ghiglieri and Myers note "All told, the Canyon has claimed at least 7 drunk drowning victims as of August, 2011." (pg 296) That is not a large number, especially when one considers well over 20,000 river runners travel through the Grand Canyon every year. Still, every fatality is one too many.

Sadly, this number increased by one on Friday, January 11, 2013, with the disappearance of Kaitlin Anne Kenney. Eye-witnesses noted that Kenney appeared to have no flashlight and that she was last seen stumbling drunk. The Coconino County Office of the Medical Examiner's toxicology report, case 13-130, noted cause of death was accidental drowning. The report also states "Ethanol was detected in a liver sample at a concentration of 1.170 mg/gram. This concentration is roughly equivalent to a blood ethanol level of 0.11 g/dL." This blood alcohol level is enough to cause coordination and balance difficulties; distinct impairment of mental faculties and judgment. The report also noted "The decedent was also suspected of having ingested hallucinogenic mushrooms." There was also a THC-COOH level of 52.5 ng/g.

This tragedy allows us a unique teachable moment. If you are partying on the River in Grand Canyon, have a "designated driver" willing to sit it out and make sure the folks who need assistance get it.