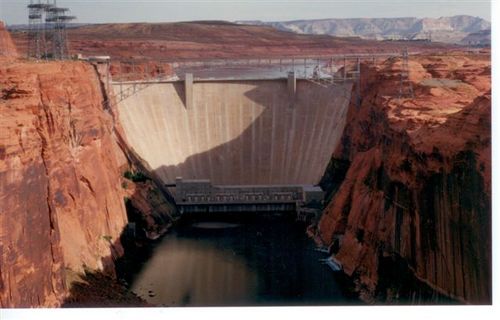 Glen Canyon Dam is operated by the Bureau of Reclamation on the main stem of the Colorado River near Page, Arizona. The reservoir, Lake Powell, is the second largest reservoir in the United States, with Hoover Dam's reservoir, Lake Mead, being the largest.

The purpose of the dam is to provide water storage and sediment storage for the arid southwestern United States. The incidental purposes of the dam are to generate electricity and provide opportunities for multiple-use recreation.

Construction of Glen Canyon Dam began in 1957 (1956 is the year of authorization). Although the dam was not dedicated until 1966 by Lady Bird Johnson, it was able to begin blocking the natural flow of the Colorado River in Grand Canyon in March of 1963.

The Sierra Club and other environmental organizations opposed the original plan for damming the Colorado River in Glen Canyon. When the plan was modified by the elimination of other proposed dams upstream in Dinosaur National Monument, however, the Sierra Club dropped its objection to the Glen Canyon Dam. Its then executive director, David R. Brower, later called this decision the biggest mistake of his career:

"Glen Canyon died, and I was partly responsible for its needless death. Neither you nor I, nor anyone else, knew it well enough to insist that at all costs it should endure. When we began to find out it was too late." (From The Place No One Knew, a Sierra Club book published in 1963). Senator Barry Goldwater, who fought for funds to complete the dam, also later called its construction a mistake and regretted his support.

The dam has continued to attract opposition. In the 1975 novel The Monkey Wrench Gang, by Edward Abbey, the protagonists believe strongly that the dam has ruined the Colorado River.

Living Rivers/Colorado Riverkeeper is an organization which advocates for the dam's decommissioning.

Continued population growth in the western and southwestern United States has placed more water demands on the river system than the river is now supplying. Consequently the reservoir storage at Lake Powell and Lake Mead has been greatly diminished.

In 1996 and 2004, attempts were made to restore supplies of fine sediment along the riparian corridor of the Colorado River in Grand Canyon. In those years, an artificial "flood flow" of 45,000 cubic feet per second was released from the outlet works at Glen Canyon Dam. This amount of water is only a shadow of pre-dam high volume flows, both in volume of water and in sediment load.

The purpose of the artificial flood is an attempt to agitate the sediment that originates from Grand Canyon tributaries, from the bottom of the river to the beaches and sandbars along the margins of the river. In theory, the redeposited sand and silt provides habitat for endangered animals and also helps to stabilize archeological sites that have been slowly creeping towards the river since the building of Glen Canyon Dam, which stopped the natural process of sediment replenishment.

Since the first experimental flood flow in 1996, the Bureau of Reclamation has not succeeded in the recovery of any endangered species and excavations of damaged archeological sites have already commenced. The Bureau of Reclamation is now undergoing a second environmental impact statement on the operations of Glen Canyon Dam in accordance to an agreement made within the federal court system.

This link from the BOR talks about the Glen Canyon Dam Long Term Experimental Plan.

Here's a short U-Tube video on The Dam

Tide Tables is where you will find timetables for tides fluctuation on the Colorado River in Grand Canyon due to Glen Canyon Dam.