So what kind of boat should I bring for the Grand? That’s a good question. The Colorado River in Grand Canyon, from Lee’s Ferry to South Cove, is 297 miles long, and can take up to four weeks to travel from end to end. The watercraft your trip brings will need to carry all the people on the trip as well as your food, refuse and solid waste, and all the cooking and camping gear.

The type and size of boat you bring depends a lot on the boat you have. An 18 foot boat with a lot of gear hauling capability for use on the Grand may be too big for either the Middle Fork of the Salmon or the Verde River when these rivers are at low water levels.

If you have a 14 ft or 16 ft bucket or self bailing boat, good for low water rivers, you sure can bring it on the Grand. You’ll have an exciting ride in big rapids, but will be limited in your ability to assist with the hauling of the trips group gear. Your ability to help haul the group’s passengers and trip gear is an important part of the river trip.

Besides hauling more gear, a larger boat like an 18 foot raft or cat is more stable for the Grand Canyon rapids. That said, the larger the raft and the more gear it carries, the harder it is to row downstream and turn right side up if the boat gets turned right side down. There’s a balance here that your group will have to find for itself.

There are many pros and cons for each type of watercraft. We’ll try to cover some of them here. The bottom line is this; the boat you like may be the boat someone else does not. Let them row their boat, and you row yours. The worst tracking heaviest boat can effortlessly travel through Grand Canyon at the hands of a skilled person rowing that pig, er, boat. 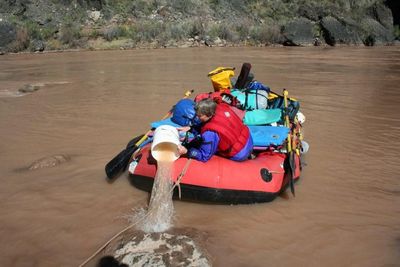 Non self bailing rafts must be bailed, typically with a bucket, hence the name bucket boat. Bucket boats in the 12 to 18 foot range used to be very popular until the self bailing boats arrived on the boating scene. Still today, some river runners are going back to bucket boats for their tracking capabilities. These boats can carry an impressive amount of trip gear and can be very easy to rig. This type of boat can also serve as a paddle boat when used without a frame, allowing up to seven people, each with a paddle, to participate in maneuvering the boat.

There are downsides to bucket boats, just like there are downsides to every type of boat. Putting a hole through the flooring material is easier than in self bailing boats. Care must be taken to keep shoes and equipment clean when getting into and out of the boat, and any dirt or small gravel that makes its way into the boat will become lodged in the floor seam and cause wear at the seam. Then there is the bailing. It can take up to 20 minutes to bail out a fully swamped 16 foot bucket boat, using a 5 gallon bucket, as this photo below Lava Falls shows. 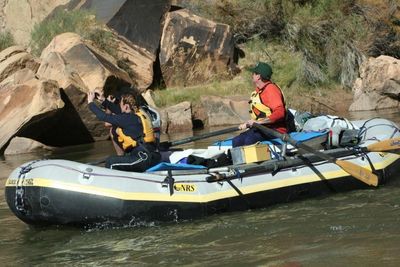 For their size, self bailing rafts in the 12 to 18 foot range are very popular. They require no bailing, and cleaning them out when someone walks across your boat with muddy shoes (a no no) is easy. You just grab a bucket and wash the muck out the bottom of the boat. When overtopped by a big wave and full of water, the “Lazarus” effect takes over, as the boat will self bail itself and slowly rise up out of the water all by itself. Self bailing floors are very rugged and can tolerate going over rocks fairly well. The ribbed floor in some self bailing boats causes better tracking according to some rafters, and worse tracking according to others. Self bailing rafts are fairly straight forward to rig. This type of boat can also serve as a paddle boat when used without a frame, allowing up to seven people, each with a paddle, to participate in maneuvering the boat.

That said, there are a few downsides to the self bailers. You must take care of the floor valve, used to get air into the floor. This valve need to be kept accessible. There may be a built in pop-off valve to prevent over pressuring the floor. These valves can stick open when exposed to mud. The top of the self bailing floor is susceptible to puncture. 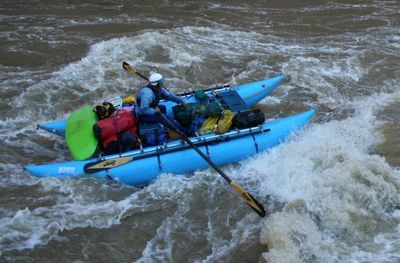 Catarafts, or Cats, consist of two parallel outboard air chambers suspending an inboard frame loaded with gear. If rigged to, they can carry an impressive amount of gear. They are self bailing, and as they do not have a floor like the self bailing and bucket boat rafts, their ability to handle large pushy waves is somewhat better. The Cat’s ability to plow through waves instead of going up and over them can give a more thrilling ride. One of the Cat’s advantages is they come in component parts, each part weighing much less than a rolled up raft. This makes them easier to store, get into/out of a vehicle, and assemble. The lack of a floor in Cats causes better tracking according to some rafters, and worse tracking according to others.

Cats typically require more straps than rafts, and require you to track all the various component parts. Leaving one of the side tubes back home is a real problem. Since Cats do not have a contiguous floor, if you drop something and it finds its way through your gear to the river below, loosing gear out the bottom of the boat can be a problem. Cats generally do not carry as much gear as a similar sized raft, unless attention is paid to how the frame is constructed. 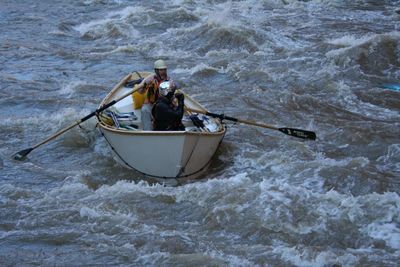 The hard hulled dory arrived on the Grand Canyon scene in the mid 1950’s when Moulty Fulmer rowed his boat the GEM through Grand Canyon in 1955. There flat bottomed elegant boats can be very sporty and responsive. They can carry an impressive amount of gear, and have what is considered to be the best ride through a rapid of all the Canyon boats. They take the least rigging of all the rafts and are typically ready to head downriver once unloaded into the water. Their watertight compartments are a great place to store food that needs to be kept cool, dry and out of the sun.

Like all Grand Canyon watercraft, Dories have their downsides as well. They need constant cleaning, and unlike rafts, do not play well with moderate contact with rocks. This can limit campsite selection or require special mooring when camp is at a rocky beach with surging wave action. They can be a little more unstable and prone to flipping more than rubber rafts. Most dories require their own boat trailer, and do not carry a cooler. 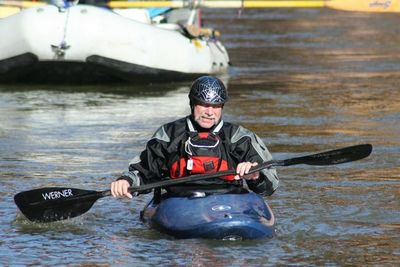 Kayaking the Grand Canyon can be a very rewarding experience. Kayaks can also carry an impressive amount of personal gear, especially the older longer kayaks. Kayaks are extremely maneuverable and are able to assist in the rescue of swimming rafters.

The drawbacks to kayaking the Grand Canyon are the miles and miles of flatwater. It is also important to have a fairly strong roll if you don’t plan to do a lot of swimming. Even the eddy fences in the Grand Canyon can easily roll a kayak. Kayaks can become uncomfortable if you have tight hamstrings, as you will be spending may hours sitting upright with your legs out in front of you with only a limited ability to sit back and relax. 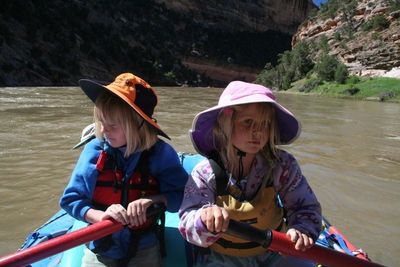 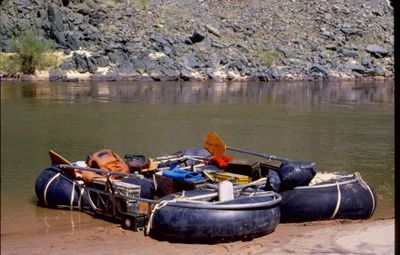 Please keep in mind that we have just covered the more traditional types of boats you will see on a do-it-yourself trip. There are other types out there, and that includes the 5% of trips that use motorboats. We do not recommend this type of watercraft for the preservation of the wilderness character of Grand Canyon. That said, there are other options still, including stand up paddle-boards. Here's one of the few photos of the Death Star series of boats. The two Stars have been joined together after the loss of an oar back upstream. This watercraft was called the Death Star Duplex or Death Star Deluxe, and is from a trip sans-permit in 1981. As far as we know, this line of boats only made one or two trips. While we DO NOT recommend or suggest you consider a sans-permit river trip, messing about with boat types and designs has a long tradition, and is how we go to where we are today. Remember, this is all supposed to be a lot of fun! Death Star Deluxe Photo Copyright Mark Scanlon.

Click here to return to The Pre-Trip Planning page.

Click here to return to the You WON The Lottery? Ok, now fill in the River Permit Application page.