The once tranquil waters of Lake Mead at the end of the Grand Canyon near Pearce Ferry, Arizona, continue to change quickly as the Colorado River is reclaiming 50 miles of what once was the flat reservoir of Lake Mead.

After nine years of drought, Lake Mead has dropped 118 feet, and as the river cuts down into lake sediment, it no longer follows its historic river bed. The "reborn" river now channels full-force into hillsides, crosses once-buried ridges and travels through rocky saddles far removed from the pre-lake river bed.

Approximately one mile north of Pearce Ferry, at river mile 280.8, the river now flows over a saddle between hills and then straight into a gravel hillside. A class 4-rated rapid (on 1-6 scale) has developed near Pearce Ferry, called Pearce Ferry Rapid.

A riffle at the top of the rapid has formed a pour-over along each bank of the river, with a tongue in the middle of the riffle going into small hydraulic waves. Just below this riffle, the majority of the river passes left of a rock outcrop and makes a sharp ninety degree turn as the full force of the Colorado slams into a rocky hillside.

A large outcrop of cemented rocks sits in the middle right of the rapid, dividing it. On the left of the outcrop is a tongue dropping into a sharp reverse-current hydraulic, and a chaotic eddy on the far left side of the reverse. On the right of the outcrop, a fast channel with a sharp drop has developed.  A larger photo of the rapid is online at the River Runners for Wilderness list server website homepage here: 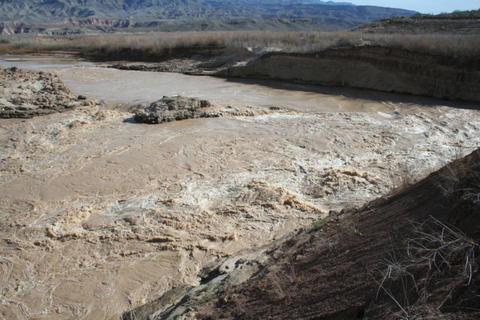 Members of the Rafting_Grand_Canyon list server have additional access to three albums with 24 photos of the rapid taken February 18, 2008. Membership to the list server is free and easy to set up.

This rapid poses a threat to river travel, as a boat could wrap on the mid-stream outcrop. Night floating through this area is no longer recommended. Scouting on river left is highly advisable. Lifejackets should be worn by all river travelers running this rapid. This rapid poses another risk in that the last rapid, upstream at Gneiss Canyon is forty-four miles above Pearce Ferry. River runners should not be lulled into thinking the last rapid has been run once they pass Separation Canyon at river mile 240.

As of February 20, 2008, there were as many as eight nick points emerging in the 13 mile section of river between Pearce Ferry Rapid and the end of current in Lake Mead, presently at the head of Gregg Bay near river mile 292.8.

The Pearce Ferry Rapid is cutting through consolidated gravels, and it is possible the river will be able to erode the gravels, thus avoiding the creation of a more serious rapid. However, river runners should exercise caution in this reach as it continues to evolve while the river reclaims the receding reservoir.

A synopsis of this rapid with photos from the last five years is found at: