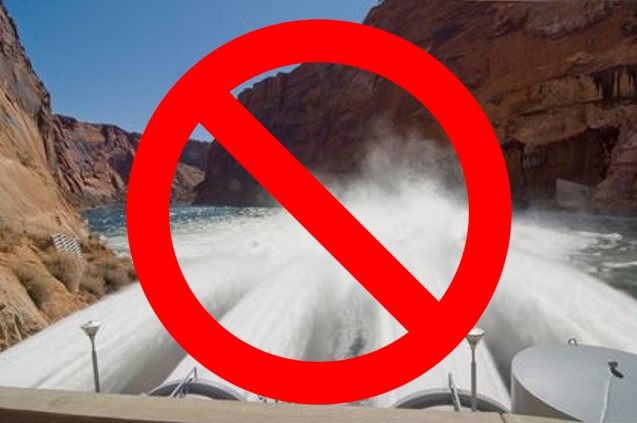 On October 5, 2021, the Bureau of Reclamation decided to call off a 60 hour long High Flow Experiment (HFE) at Glen Canyon Dam that had been considered for later this year. A spring flow has not been ruled out.

The decision to not implement a fall flow came as record setting monsoon activity has delivered ample sediment to the bed of the Colorado River in Grand Canyon. The same rains washed out campsites along the river, locations that the HFE would have filled back in with sand.

The HFE would have released 33,000 cubic feet per second of water from the dam for 60 hours. Flows would have been adjusted slightly over the next six months so the net release of water from the dam would be the same if the HFE hadn’t happened. According to Reclamation officials, the HFE had the potential to increase sandbar size by over 30% in November 2021 relative to October 2021.

The financial side of the HFE is problematic. The Western Area Power Authority (WAPA) has firm electric power contracts but the reservoir is running out of water to make electricity to meet those obligations.

$1.30 million and $4.66 million. Of course, higher flows to make more electricity also move much of the sand deposited after an HFE on downriver to Lake Mead anyway.

Before the construction of Glen Canyon Dam in the late 1950s through early 1960s, high spring snowmelt flows would deposit sediment from up basin throughout the Grand Canyon. In 40 years of continuous flow records at Lees Ferry, Arizona from 1922 through 1962, only 6 summers recorded high flows below 40,000 cfs. Flows over 100,000 cfs occurred in 11 of the 40 years. One of the stated purposes for the construction of Glen Canyon Dam was sediment retention to keep sediment from filling the next reservoir downstream, Lake Mead.

Glen Canyon Dam does a good job of retaining sediment, but sediment is important to make critical habitat for native fish and insect populations in Grand Canyon National Park, just downstream of the Dam. The Paria River, an undamed and sediment rich tributary, enters the Colorado River at Lees Ferry. The HFE attempts to take the sediment added to the river from the Paria and redistribute it up to near shore areas, both as sandbars for fish and insect habitat as well as beaches for river runners to camp on.

While the river below the Dam is short of sediment, the reservoir behind the Dam is short of water. According to the Bureau of Reclamation, the Colorado River Basin is experiencing its 22nd year of drought. Following two extremely dry periods of runoff in 2020 (54% of average annual inflow) and 2021 (33% of average annual inflow), the two reservoirs (Lake Mead and Lake Powell) are at their lowest levels since they were originally filled.

It’s not just lack of water but too many people. Population growth in the major cities of the southwestern United States represents the largest migration in the history of our species. This increase in population during times of drought continues to put huge demands for water on the Colorado River, a river no longer able to meet the needs of the population relying on it.

RIVERWIRE is a free service to the community of river lovers from River Runners for Wilderness. To sign-up for future Riverwires, send an e-mail address to riverwire@rrfw.org and we'll add it to the RRFW Riverwire e-mail alerts list.

Join RRFW's many Facebook discussion groups to stay abreast of and participate in the latest river issues.

The Colorado Basin group is at https://www.facebook.com/groups/GCRRaftersPaddlersSupsSwimmers/

The Upper basin group is at https://www.facebook.com/groups/utahrafters/

The Grand Canyon group is at https://www.facebook.com/groups/raftgc/

General River News is at https://www.facebook.com/groups/RiverNews/

Check out RRFW's Rafting Grand Canyon Wiki for free information on how to organize a Do-It-Yourself Grand Canyon rafting trip at https://rrfw.org/RaftingGrandCanyon/Main_Page

Check out new store items and donate at the RRFW Store! RRFW is a non-profit all-volunteer project of Living Rivers. https://rrfw.org/catalog