As of May 27, Lake Mead's water surface stood just under 1131 feet above mean sea level. This is well below the lake's maximum elevation of 1225.4 feet and significantly below the average lake level of 1163.8 feet. It is still above the historic minimum level of 1083.6 that occurred in 1956 before Lake Powell was constructed.

The low lake level has caused the river to establish a channel in the sediment deposits in the upper reaches of the now-dry lake above Iceberg Canyon at Mile 289. 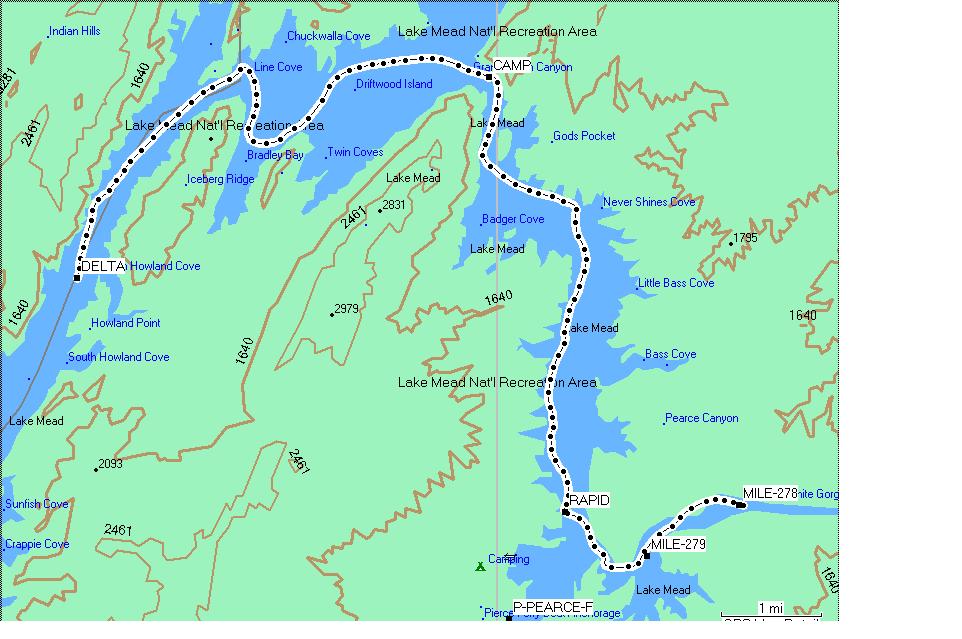 The river is running clear upstream of Separation Canyon at Mile 239.6, but there appears to be headward erosion occurring as the lake drops. The river gets slow and shallow with sandbars downstream of Separation Canyon, but the current (and gradient, I assume) increases by about 3 mph around Quartermaster Canyon and begins to run muddy - very muddy. All of this sand and silt is being carried down and deposited at the current lake.

The river has cut a well defined channel in the silt, but the channel becomes broad and shallow in Iceberg Canyon where the sand load from upstream is being deposited. The river appears to be depositing a sand wedge in the deep water near the downstream end of Iceberg Canyon. The lake water is crystal clear less than 300 feet from where the current dies. The silt in this area will become exposed and a channel will begin to form as the lake continues to drop. The sand wedge will move farther and farther into the lake. The cut banks get taller if you proceed upstream and seem highest near the mouth of the canyon at the Grand Wash Cliffs at Mile 276.5.

Between the Grand Wash Cliffs and Iceberg Canyon, the river meanders across a silt plain. You can't make any wrong turns into dead-end bays. The channel goes from one side of the "lake" to the other, only approximately following the old river channel that's now buried. At one point at the downstream end of Pearce Bay, the channel cuts across a projecting low ridge. 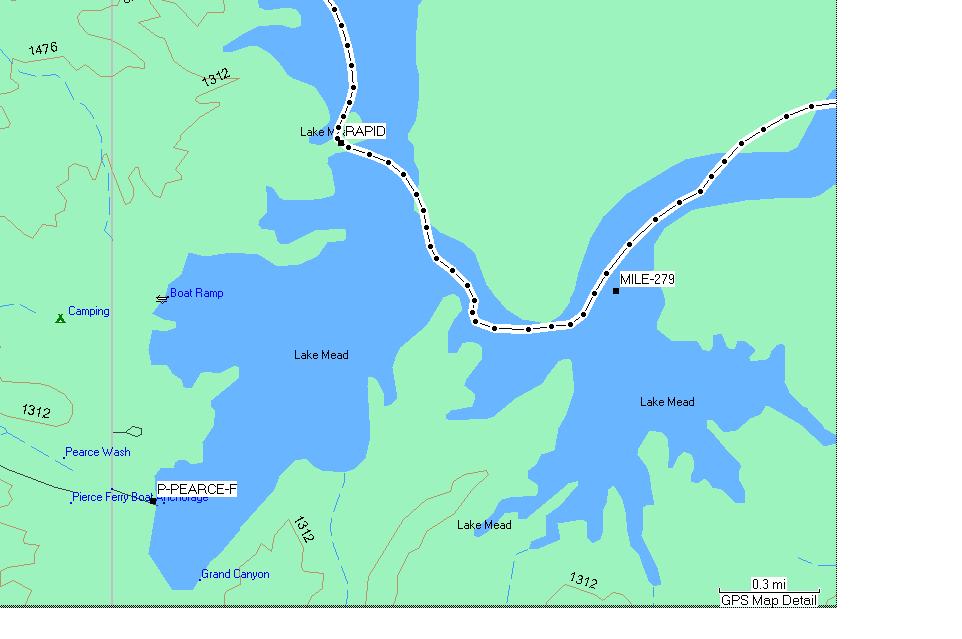 The ridge is resisting erosion and is beginning to form a small rapid. I suspect this could become an unnavigable monster if the lake continues to drop and the ridge stands up to the river's force as the downstream silt continues to erode.

Heavy rains in February have blown the vegetation out of a number of side canyons. A nice one was at 247.5 left. The bed load moved by this flood is awesome to walk on.

If you run the canyon below Diamond Creek, be aware that most of the usual campsites below Separation are overgrown. Some of the better sites are the following: 243 Mile, a new beach at Surprise Canyon (right), a new beach at Quartermaster (left, lots of sun exposure), and an excellent new beach on the left at 285. Many smaller beaches offer camping, but maybe not in the style you're accustomed to. We crowded onto a skinny beach downstream on the left when we found 243 Mile occupied. All of these sites may become unusable as the river channel continues to erode and tammies and willow choke them.

The entire trip could conceivably be rowed since the current is reasonable for most of the trip, but be aware that it's full-on lake from Mile 293 to South Cove at Mile 297. I'd hate to row this stretch with its headwinds and waves!