River Runners for Wilderness continues to keep our readers apprised of the important changes taking place under what was Lake Mead as the reservoir contracts and changes through years of extended drought. The new Pearce Ferry Rapid is a class 4-rated rapid (on 1-6 scale) that developed over the last two years approximately one mile north of Pearce Ferry at river mile 280.8, where the river flows over a saddle between hills and then straight into a hillside consisting of consolidated gravels.

A riffle at the top of the rapid has formed a small pour-over along each bank of the river, with a tongue in the middle of the riffle going into small hydraulic waves. The Pearce Ferry Rapid is positioned just below this riffle. The majority of the river passes left of a rock outcrop and makes a sharp ninety degree turn as the full force of the Colorado slams into a rocky hillside.

A large outcrop of cemented rocks sits in the middle right of the rapid, dividing the river channel. On the left of the outcrop is a tongue dropping into a small reverse wave, indicative of a submerged rock. This wave is a new development since February of this year. 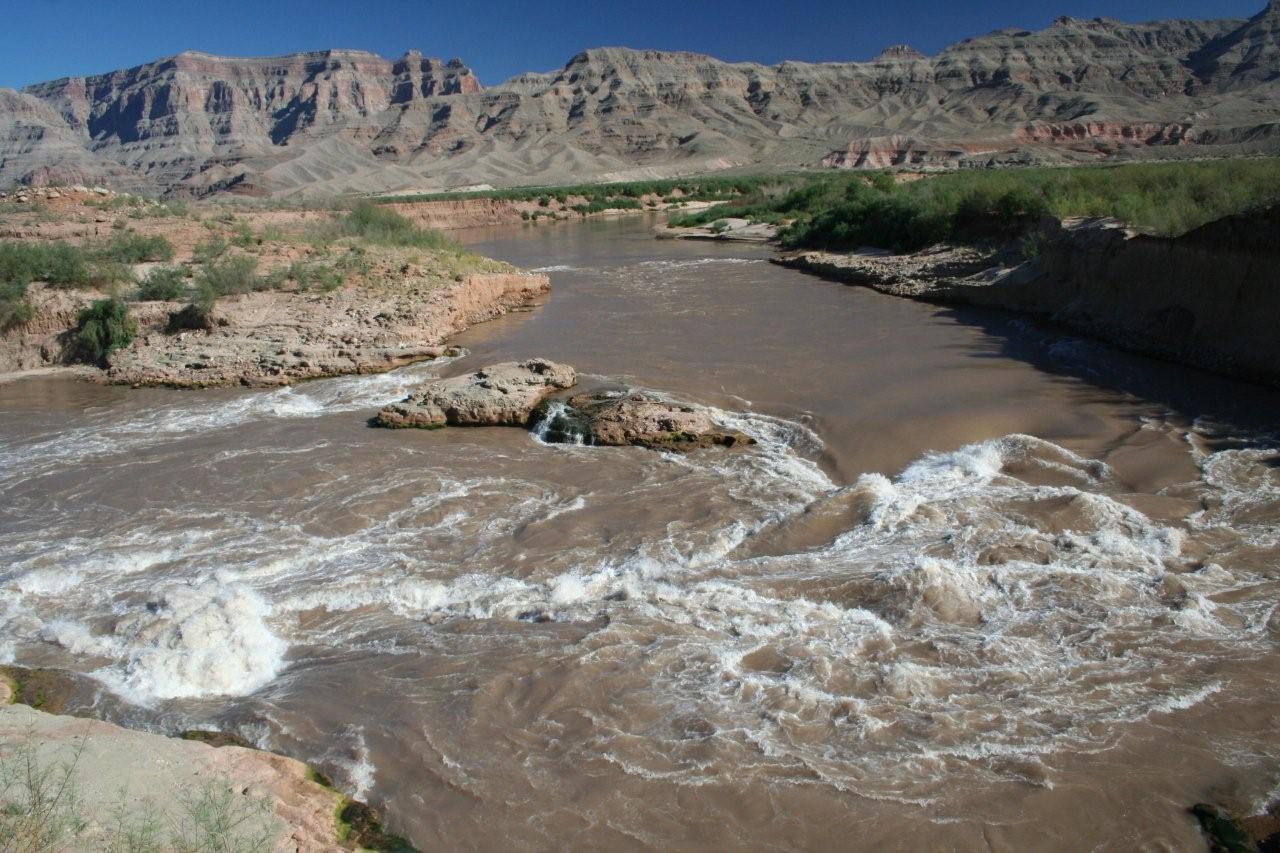 Once past this submerged rock, the rapid has a sharp reverse-current hydraulic, and a mild eddy on the far left side of the reverse, which appears to be getting larger as it erodes the soft sediments that form the bank at this location. A strong hole has formed on the far left side of the river channel along the left bank at the foot of the rapid. On the right of the outcrop, a fast channel with a sharp but run-able drop has developed.

Photos of the rapid taken October 8, 2008, are online at the River Runners for Wilderness Gallery here: https://rrfw.org/gallery/

This rapid poses a threat to river travel, as a boat could wrap on the mid-stream outcrop. Night floating through this area is NOT recommended. Scouting on river left is highly advisable. River runners should use caution near the edge at the scout location at the top of the bluff on river left. Lifejackets should be worn by all river travelers running this rapid. This rapid poses another risk in that the last rapid, upstream at Gneiss Canyon, is forty-four miles above Pearce Ferry Rapid. River runners should not be lulled into thinking the last rapid has been run once they pass Separation Canyon at river mile 240.

The geologic term for this type of rapid is called a Nick Point. Here, harder bedrock material forms a waterfall which prevents further down-cutting upstream of the waterfall. The Pearce Ferry nick point continues to change. River runners can expect nick points to form both above and below this point.

While a small area is available for camping just above this rapid on river left, a much larger camp is at the foot of the rapid, also on river left.

A synopsis of this rapid with photos from the last five years is found at: http://www.durangobill.com/GCTourSuperimposition.html

A video of this rapid from September can be found at this You Tube link: