The proposed development of a huge resort and tramway at the confluence of the Little Colorado and main Colorado Rivers in Grand Canyon, first proposed in February of 2012, has taken an ominous new turn.

You may recall that a group of Phoenix developers, known as Confluence Partners LLC, signed a Memorandum of Understanding with some representatives of the Navajo Nation to move the project forward. The LLC has no prior company experience in any type of construction.

Named the Grand Canyon Escalade, the tramway and resort has generated a groundswell of opposition from memb 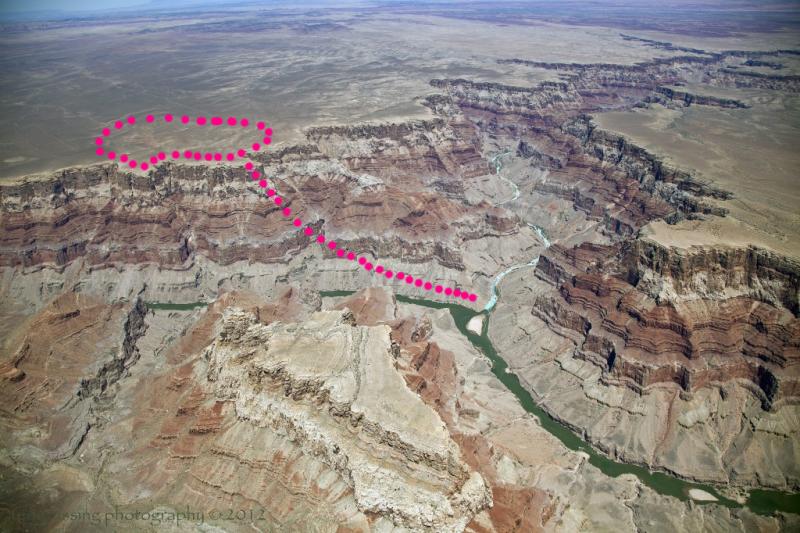 ers of the Navajo Nation, neighboring tribes and citizens from around the world.

The Escalade would be built on Navajo Nation land perched above the main Colorado River, with a long, fully visible tramway down to the river’s edge and would include 4,000 square feet of restroom facilities at the bottom of the Grand Canyon.

The development would also include an RV park, airport, restaurant, five star hotels, a boutique and a Discovery Center on the rim, 4,000 feet above the confluence, along with boat and helicopter tours.

The Navajo Nation draft legislation spells out the duties of the partners, and requires the Navajo Nation to expend  a minimum of $65 million for a 20 mile all-weather road to the development location, as well as power, water, and telecommunications. The Navajo Nation would also be required to construct a wastewater treatment facility able to accommodate over 2 million visitors annually.

The draft legislation also makes no mention of two existing Tribal Parks, the Navajo Nation Marble Canyon and Little Colorado River Tribal parks. These parks were created by tribal agreement in the 1960’s and 1970’s to preserve this area of Grand Canyon.

With $65 million in Navajo funds to be spent in supporting this Phoenix developers’ scheme, grassroots Navajo groups are working on a list of needs that are more relevant, more helpful, and not destructive of Navajo values and the Grand Canyon.

- You support a tramway-free Grand Canyon.

- Tell Secretary Jewell that the two Navajo Tribal Parks, Marble Canyon and Little Colorado, in the eastern Grand Canyon, would be excellent areas for Interior to work with the Navajo Nation as the 1975 Act encourages her to do, with federal funds, to make these Parks, under Navajo Nation direction, known and available to the public in an appropriate way that does not desecrate the area;

- Tell Secretary Jewell that the Department of Interior should be supportive of Navajo residents in the Grand Canyon area of Western Navajo by working with the Navajo Nation on a Navajo-generated list of regional needs such as housing, sanitation, telecommunication and water supply projects.

- Remind the Secretary of her duty to work with the Navajo to protect and preserve the Grand Canyon as the 1975 Grand Canyon Enlargement Act required.

Or send an e-mail to Secretary Jewell at feedback@ios.doi.gov

You can see the draft Navajo Nation legislation (16 Mb) at the following links: