In
Books and Guides 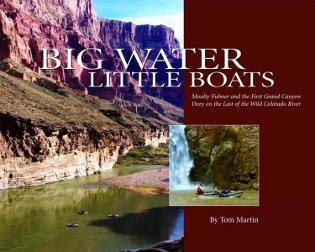 Big Water Little Boats: Moulty Fulmer and the First Grand Canyon Dory on the Last of the Wild Colorado River

By Tom Martin, author of Day Hikes from the River and Guide to the Colorado River through Grand Canyon (with Duwain Whitis)

There was a time when river runners built their own boats and rowed the Colorado River through Grand Canyon on free-flowing water; no permit problems, no high-tech gear and not much in the way of backup. What they did have were cameras, lots of film, cans of food, life jackets and journals to keep their notes in. Tom has chatted with a number of the guys and gals still standing, then scoured libraries, attics and garages to find the stories and pictures the others have left behind. He built a replica of Grand Canyon’s first dory, a fully decked McKenzie River dory, from photographs, notes, and the original wreck still housed in the Grand Canyon National Park Special Collections. The replica has made it through the Canyon four times since, even with Tom's poor driving. Here he tells the story of Moulty Fulmer, Brick Mortenson, P.T. Reilly, Dock Marston, and their friends on river trips on some of the highest water ever run in the Grand Canyon. BIG WATER, LITTLE BOATS includes many stories of other trips during the same time period, the 1940s through the 1960s, including the development of recreational river running and boat design on the Colorado.